Ethernity, the team behind Ethernity Chain, has successfully concluded its Initial DEX Offering (IDO) on Polkastarter. The campaign lasted all but three minutes, as over 160,000 users wanted to participate in the token sale. This marks a significant milestone for the charity NFT project.

Over the past few weeks, there has been a lot of hype associated with Non-Fungible Tokens (NFTs). Most recently, Ethernity announced their Muhammad Ali collection in collaboration with ABG, the 3rd biggest licensor behind Disney and Universal. Even Taco Bell is getting in on the action by issuing a NFT for four digital art collectibles. While some may see this as a temporary hype, the potential for increasing brand awareness is tangible.

Other initiatives to pay attention to include NBA Top Shot – a project raising $300 million in sales – and Cent, a platform where anyone can sell their Tweets for money. These are just some examples of what blockchain technology is capable of, and why the immutable minting of artwork ownership will become more crucial in the future.

One of the projects attracting a lot of attention is Ethernity. Even before the project’s IDO started, there was a lot of buzz surrounding this new venture. Being able to mint NFTs as a way to help support charitable causes brings more legitimacy to this nascent industry.

The launch of this platform coincides with the ongoing FOMO surrounding Non-Fungible Tokens. Striking the iron while it’s hot will give Ethernity a competitive edge over other platforms still trying to find their place in this market.

As a charity NFT project, Ethernity has received support from numerous well-known investors, musicians, and athletes. The platform focuses on donating the proceeds of digital art auctions to charity. One such example is the aforementioned upcoming “The Fight of the Century NFT, created in collaboration with The Ali Foundation. 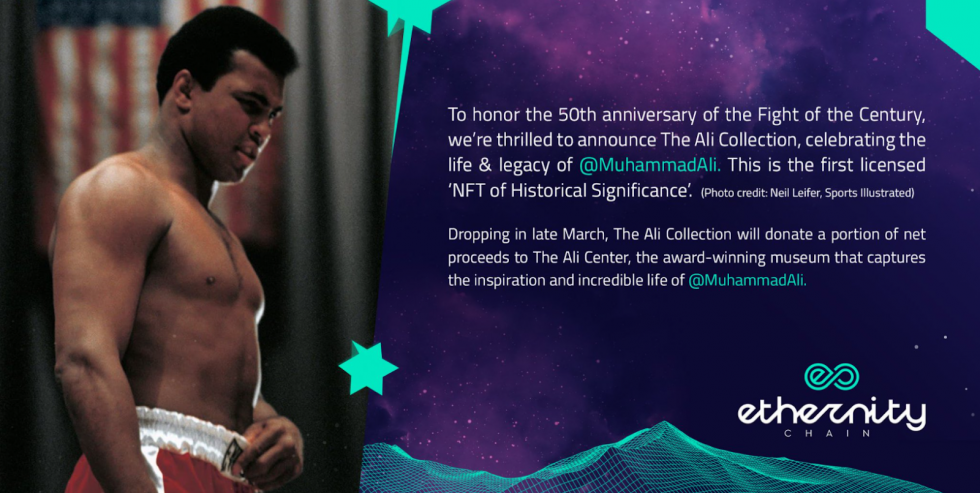 Following a peak in global interest for Non-Fungible Tokens (NFTs), platforms such as Ethernity will only become more crucial moving forward. With the Beeple NFT collection raising $3.5 million and Christie’s facilitating an NFT sale, investors from all over the world are trying to get in on the action.

Ethernity provides a way to auction off [digital] art to raise money for charitable causes. This model has attracted a lot of attention even ahead of the ERN token sale on Polkastarter. That sale concluded within 3 minutes, as investors had pooled together enough ether to quickly buy up the available supply.

Over 160,000 users applied to Polkastarter to become whitelisted for this token sale, further confirming the demand for what Ethernity brings to the table. According to Polkastarter’s statistics, a total of 454.545 ERN has been distributed to 2.580 token holders worldwide.

It is not surprising to see Ethernity and Ethernity Chain note such steep success. BossLogic, a renowned artist who dropped NFTs issued on the Ethernity Chain on OpenSea, caused some issues for the popular NFT marketplace. The platform experienced a brief outage due to a massive surge in web traffic.

Moreover, the ERN token trading is now live on Uniswap. Traders can explore the ERN-ETH pair, which has over $ million in pooled liquidity and notes $60.3 million in 24-hour trading volume. One ERN is currently trading at $9.47, nearing the all-time high of $11.533 again. Considering how IDO participants obtained ERN at $0.3, they have already seen a significant investment return.

What makes Ethernity so appealing is how the team provides artwork created by in-house artists worldwide. All digital artworks are represented by NFTs, which include one-of-a-kind trading cards and 3D abstracts. Commemorating public figures, celebrities, and historical events on the blockchain creates an immutable record that will live on forever.

As a portion of all funds raised through NFT sales will go toward a charitable organization, Ethernity isn’t just about buying art in a digital format. Up to 95% of all proceeds can be forwarded to a charity of the public figure’s choice, depending on the celebrity and artist’s agreement. Every individual drop on the platform will share these details in a 100% transparent manner.

Disclaimer: The information presented here does not constitute investment advice or an offer to invest. The statements, views, and opinions expressed in this article are solely those of the author/company and do not represent those of Bitcoinist. We strongly advise our readers to DYOR before investing in any cryptocurrency, blockchain project, or ICO, particularly those that guarantee profits. Furthermore, Bitcoinist does not guarantee or imply that the cryptocurrencies or projects published are legal in any specific reader’s location. It is the reader’s responsibility to know the laws regarding cryptocurrencies and ICOs in his or her country.